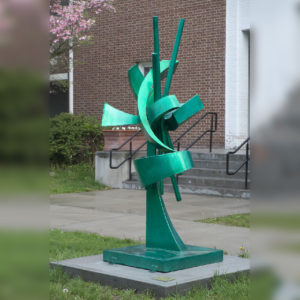 Originally from New Jersey, Richard Pitts is a Pratt Institute graduate with a military background who began with a studio on 18th Street, NYC, is a founding member of the First Street Gallery now located in Chelsea, NY (an artist run gallery), full professor of Fine Art at the Fashion Institute of Technology, founding member of Urban Studio Unbound, President of M55 Art.

“Since the 1970s, landscape has served as either framework or subject while the acquisition of meaning has shifted toward the viewer. Richard Pitts continues to explore the various metaphors inherent to the natural environment, suggesting that art is not only bridged with life but is also a product of it. In creating this new series of free-standing, abstract sculptures, the artist lends form to the notion of placeless-ness, rendering a series of aesthetic intersections where personal narratives commune with the visual. Intended for both interior and exterior sites, Richard Pitts’ new selection of colorful, metallic objects free up the art experience even further by utilizing the tenets of formalism to touch upon a deeper sense of “being” in the world.

“Pitts has expanded into the third-dimension by forging the drawn line into a single, hand-held object. Extending this idea onto a series of surfaces that echo the thick, black line seen in his earlier work, the artist compiles a series of randomly tailored surfaces that connect with one another to represent either frosty, wall-hung starburst shapes or tall, wing-like forms. Pitts utilizes the drawn line as a springboard for sculptures that attempt to draw on their own, within the scope of physical space.

Richard Pitts’ new sculptures are complex in that they symbolize time or, more simply, the thought or feeling of a particular moment. In 2001 Pitts began breaking down the painted figure into a series of panels that fit together in a puzzle-like fashion. This gradual separation of colors appeared five years later in a series of tall totem structures that reflected a variety of juxtaposing colors, patterns and textures, which were separated by a thick, undulating black line, echoing the construct of stained glass windows. However in giving shape to a series of metaphysical characteristics that are rarely captured within figurative painting, Pitts has moved the idea of sculpture away from its multi-layered, object-based history and toward one’s personal mythology.

Portions in quotes above written by Jill Conner